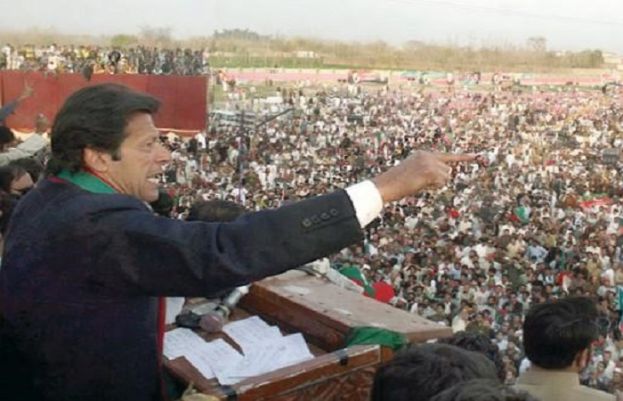 Prime Minister Imran Khan said on Sunday that whether he remains in government or not or he live or die, he will not spare the corrupt leaders and also promised to spend all the money collected through taxes.

Addressing the historic Amr Bil Maroof (enjoin the good) rally at parade Ground in Islamabad on Sunday, he said, “First of all, I would like to thank my nation from the bottom of my heart for coming here today from every corner of Pakistan on my call and today I want to speak my heart out to you.”

He said that our country was built under a great ideology, that ideology was a welfare state which was to be built on the principles of Madina.

The Prime Minister said, “I am proud that we have moved towards a welfare state, we are a country of the developing countries which has no health insurance of the world but we have brought health insurance.”

He said that no other program such as PTI’s Ehsaas Program has been started in the history of Pakistan to uplift the weaker sections. In New Pakistan, interest-free loans worth Rs 2 million are being provided to a family to build a business and a house. The premier also expressed the resolve to make Pakistan an Islamic welfare state on pattern of the State of Madina as established by Holy Prophet Muhammad (PBUH).

The PM said that he is proud of his parliamentarians but some people tried to buy the loyalities of the lawmakers.

Imran Khan said that with the increase in the tax collection, the PTI government instead of increasing the prices of petrol gave a subsidy of 250 billion and reduced the price of petrol by Rs 10 and power tariff by Rs 5 per unit.

The PM further said that under this passion of the nation, Pakistan has to become a great nation of the world. “I have stood by my ideology for 25 years and I believe that if we follow the path of the holy Prophet Muhammad (PBUH), our country will become great.

He said, “My promise is that when his govt complete 5 years, the whole of Pakistan will see that no government has eradicated poverty from Pakistan so fast.”

Launching a diatribe against opposition leaders, he said corrupt elements have been plundering the national wealth for thirty years and now they are trying to blackmail him by moving a no-confidence motion against him.

Imran Khan said he will not compromise on supremacy of law to put the powerful under the ambit of law that is why no NRO will be given to corrupt.

The prime minister while waving a paper said that foreign money is being poured to topple his government, while “some of our people are also being used to topple the govt”.

PM Imran said we introduced the policy of smart lock down to handle Covid-19 pandemic. He said the entire world lauded our policy of protecting our people and the economy in a sane manner. Quoting a report of the World Bank, he said there is least unemployment in Pakistan as compared to other countries of the subcontinent.

He said that due to prudent policies of the government, economic growth was recorded at 5.6 percent.

Highlighting his government s pro-people policies, the Prime Minister said exports, industry and tax collection witnessed record growth, adding that Rs 30 billion were allocated to facilitate salaried class to have their own house through easy loans.

The PM said 10 big dams are under construction and will likely be completed by 2028. This will ensure availability of sufficient water for irrigation and human consumption.

Khan said Ravi Urban City project is being completed in Lahore, which is the second planned city after Islamabad in the history of Pakistan. Besides, Lahore Business District is being established to promote businesses in the country.

He said the government has successfully revived the Reko Diq project, which will bring an investment of nine billion dollars. He said the people of Balochistan will benefit the most from this project.

Regarding government s initiative to overcome climate change challenge, Imran Khan said that his government is working on 10 Billion Tree Tsunami Program, adding that we will leave an environmentally-protected country for the coming generation.

He said the government will make Pakistan a tourism hub as it is blessed with enormous scenic beautiful tourism places. He announced to make Skardu of Gilgit Baltistan as a skiing capital of the country.

Minister for Defence Pervaiz Khattak said that the people of Pakistan will have to stand with honest leader Imran Khan and the dissident PTI members will regret.

Khattak said that PM Imran Khan wants to save the country from thieves and looters, adding that the only problem of the opposition is that the Prime Minister wants to take the country forward. Neither Imran Khan is going anywhere nor anyone can remove him, he added.

He further said that after four days, they [opposition] will be seen crying, adding that there was nothing to be scared or panicking.

He said that the three rats have brought no-confidence motion against the PM after the United Nations adopted a resolution introduced by Pakistan and designated March 15 as ‘International Day to Combat Islamophobia’.

Ali Zaidi said that the party has not started yet, don’t get tired, adding that we are proud that Imran Khan has become the leader of the Muslim Ummah. He said the three rats have joined hands and they have come up with no-confidence motion.

The minister while taking a dig at PPP co-chairman Asif Ali Zardari said, “One of the three rats is such a big rat that ate all the wheat of Sindh, destroyed the hospitals and schools of Sindh, I will hunt this rat under the leadership of Imran Khan.”

Closed since 2019, Khunjerab to reopen for trade from 1st