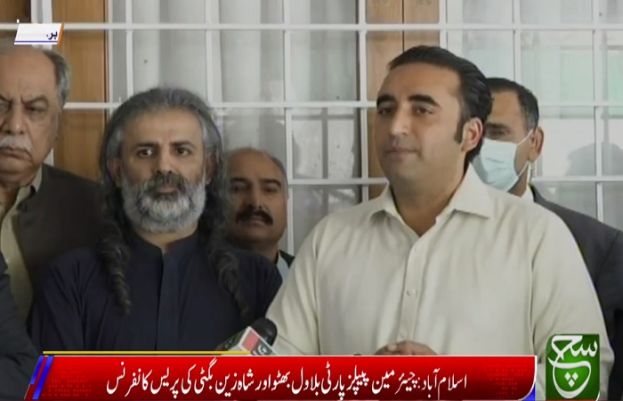 Jamhoori Watan Party leader and special assistant to the prime minister (SAPM) on reconciliation and harmony in Balochistan, Shah­zain Bugti, announced on Sunday his resignation from the federal cabinet citing a lack of development in the province.

He made the announcement while addressing a press conference in Islamabad alongside PPP Chairman Bilawal Bhutto-Zardari. Earlier today, Bilawal called on Bugti at his residence where the two discussed the political situation in the country.

The prime minister had appointed Bugti as his special assistant last year in July soon after deciding to hold talks with disgruntled Baloch tribesmen to pave way for permanent peace and progress in Balochistan. PM Imran had tasked him with holding talks with peeved Baloch tribesmen on behalf of the government.

His resignation comes amid mounting political tensions ahead of the no-confidence vote submitted by the opposition against the prime minister.

Addressing today’s press conference, Bugti said that the government had failed to deliver in Balochistan. “The federal government gave us hope that things will improve but the people have been disappointed,” he said, announcing his resignation from Prime Minister Imran Khan’s cabinet.

“We are standing with the Pakistan Democratic Movement and will do whatever we can,” he said.

Elaborating on his grievances, he said that when the prime minister first came into power he promised to focus on South Balochistan and under-developed areas. “But he failed to do so.”

The MNA also alleged that insurgency grew during the PTI government’s tenure due to its negligence. “I have done everything except for banging my head into the wall. […] Imran Khan says everyone is corrupt. [But] put the evidence in front of the people, they will decide. But all you do is use wrong words.”

He added that the government had announced a development package for South Punjab but had ignored Balochistan. “You couldn’t allocate Rs4bn for the province. Do you consider the province your last priority?”

Meanwhile, Bilawal termed Bugti’s resignation a “brave decision”. The PPP chairman said that the MNA had tried to work with the government during the past three years but it had betrayed the people and the opposition, adding that PM Imran had “used his allies”.

Thanking Bugti, he said that the MNA had sent a message to the people of the country. “The people are looking to us to solve their problems. Balochistan’s issues are complicated and our history has not been fair with the people of the province.”

He asserted that Bugti had taken an “independent decision” which was announced today. “The decision came from the experience of working with these people for three years. Bugti sahab is a brave man and he values his word.”

Commenting on the premier’s “surprise” for the opposition, the PPP chairman said that PM Imran had “lost his power”.

“This is all propaganda and it won’t work because the people of Pakistan know that Naya Pakistan mean inflation and unemployment. The people will not fall into the same trap again no matter what they say.”

People of Pakistan will come out only to oust PM Imran: Maryam Nawaz