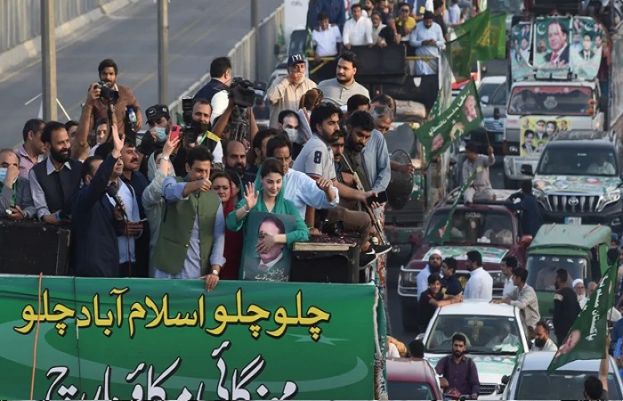 As PML-N’s “Mehngai Mukao March” kick-started on Saturday from Lahore’s Model Town, PML-N Vice President Maryam Nawaz said that the government has “already been ousted” and the Opposition was heading to Islamabad to say “goodbye” to PM Imran Khan.

The PML-N leader said that the “people are echoing” the name of party supremo Nawaz Sharif due to the “incompetent government and inflation”.

“The government has gone a goodbye is left only. He’s (Imran Khan) is pleading but nothing will happen now,” said the PML-N leader. She added that move to oust PM Imran was taken by the government and not the Opposition.

Talking about the government allies who are yet to make a decision, Maryam said that no one will stand with the premier as his own party members were ditching him.

“Imran Khan is the nation’s culprit, not Nawaz Sharif or Maryam Nawaz,” said the PML-N vice-president. She added that no matter comes to power, it will take time to fix the “destruction” done by PM Imran Khan.

“If there is an external conspiracy against Imran Khan, then the name of this conspiracy is Imran Khan himself. Imran Khan is not such a big personality that the world would conspire against him,” said Maryam in response to the claim made by the premier that the Opposition was being backed by foreign powers.

Maryam is leading the “Mehngai Mukao March” with Opposition Leader in the Punjab Assembly Hamza Shahbaz. They had kicked off the march from Lahore’s Model Town, earlier today. Their final destination is Islamabad and the duo will arrive in the federal capital after multiple stops along the way.

The PML-N march will join the Opposition’s rally in Islamabad that is set to be held on March 28.

The march is being held amid a no-confidence motion submitted against Prime Minister Imran Khan. The Opposition had submitted the motion on March 8 at the National Assembly secretariat.

Since then all eyes have been on Islamabad as the Opposition is trying to cajole the PTI allies to leave the government, while PM Imran Khan and his ministers are trying to ensure that the allies do not jump ship.

Apart from the allies, many PTI lawmakers have also come out in the open and started to express their frustrations against PM Imran. However, they are yet to decide whether they would support the motion or go against it.