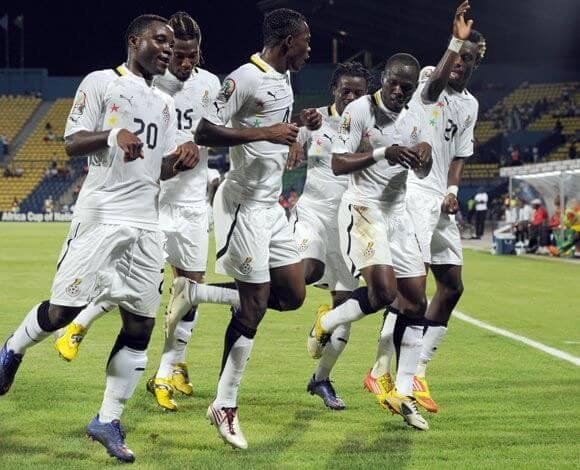 His World Cup display also certified his status as a national icon. After earning another 10 caps in the period between the 2010 WC and 12 AFCON, with a 10-goal EPL season in between, Gyan was called up for the 2012 continental showcase.

The marksman played 5 of his side’s 6 games at the tournament, scoring once as Ghana progressed deep into the tournament only to finish fourth in a slightly disappointing showing from The Black Stars.

Gyan missed a penalty kick in the 1-0 SF loss to Zambia, which led the distraught striker to retire from international football after the tournament. He would retract that decision 3 months later.

Fortunately for Ghana, the next AFCON was the next year in 2013. Gyan was called up, and he also made captain. He played all 6 of his side’s games as Ghana finished fourth once again, scoring once.

Despite now playing his club football in the Middle East, Gyan continued to earn caps for his country, with 14 in 2013 alone. As a result, he was called up for his third WC appearance.

At the tournament, Gyan captained his side in all of The Black Stars’ games as Ghana failed to exit the group stage at WC for the first time. He performed well individually though, scoring twice in 3 games to become Ghana’s highest-ever goalscorer at World Cups (6 goals).

Next was the 2015 AFCON only a few months after the WC, and Gyan was called up once again as he was captain of the team. The striker played 4 of his side’s 6 games as Ghana reached the final only to lose on penalties again at the 1992 AFCON.

Gyan netted once, the winning goal versus Algeria in the group. Determined to win silverware with his country, Gyan refused to retire afterwards.

At the 2017 African Cup of Nations, Ghana came 4th for the 4th time in continental history (and 3rd out of their last 4 continental appearances). Gyan, then playing for Turkish side Kayserispor, played 5 of Ghana’s 6 games, scoring once- the winning goal versus Mali in the group stage.

Gyan initially retired from international football in May 2019, but after conversations with the Ghanaian president, reversed his decision. The 2019 AFCON would be Gyan’s last major international tournament.

He played 2 of Ghana’s 4 games as The Black Stars exited in the RO16, a massively disappointing display from the team. Gyan failed to score, which was understandable, considering he was now 34-years old.

The marksman retired from international football after the tournament. A poacher with good anticipation and even better composure, Asamoah Gyan was often the man for big occasions

Abedi Pele is one of Africa’s greatest ever footballers. Father to Andre Ayew, Abedi Ayew was nicknamed ‘Pele’ due to his natural ability on the ball, and the attacker ensured he lived up to the name during his career. Pele’s senior international debut came on 2nd August 1981 aged just 16-years old.

Abedi was then just starting his second season at Ghanaian side Real Tamale United. Initially sporadic, Pele began to get more game-time in the national setup in 1982, earning 5 caps that year prior to being called up to the 1982 African Cup of Nations.

At the tournament, the attacker played 4 of Ghana’s 5 games as the Black Stars triumphed on the continent for the first time. Despite not scoring any goals, Pele’s early success undoubtedly shaped his mentality later on. Pele’s next major international tournament was the 1992 African Cup of Nations a decade later.

By this point, the forward was more of a veteran, having amassed 40 caps with 6 goals accompanying them. He was also then in his fourth season at French giants Olympique Marseille, and experiencing his best season as a pro.

At the 92 AFCON, Pele had a barnstorming tournament, playing 4 of Ghana’s 5 games and netting 3 goals as the West-African nation finished with a silver medal. His goals were the winning goal versus Zambia in the group, the winning goal in the QFs, and the opening goal of the SFs versus Nigeria.

The 1992 AFCON performance cemented Abedi’s status as a superstar in the national setup, making him undroppable. After earning another 5 caps between late 1992 and the end of 1993, Pele was called up to represent Ghana at the 94 AFCON.

Despite playing all of his nation’s games, he failed to score at the tournament. The Black Stars were disappointing as well, exiting in the QFs.

Despite his club form being inconsistent at the time, Pele continued to perform in Ghanaian colours whenever called upon. He only earned 3 caps in 1995, but Abedi was called up for Ghana’s 1996 AFCON campaign. At the tournament, the attacker played 4 of Ghana’s 6 games as the Black Stars finished 4th place.

A valiant display from the collective was also propelled by Abedi’s quality, as he scored 3 times including the opening goal on two occasions. The forward’s efficiency in front of goal was rewarded with a place in the team of the tournament.

Similar to Jay-Jay Okocha and Ronaldinho in natural flair, Abedi Pele was poetry in motion whilst in possession. Blessed with electric speed and fantastic close control, Pele could also be a playmaker when necessary. His movement was instinctive and his attacking positioning was brilliant.

For a forward/midfielder, his heading ability was elite, while his composure in front of the goal was akin to a striker. He is one of the most mercurial talents Africa has ever produced.

A man known for big moments in the Black Stars jersey, their current captain Andre Ayew has had a fantastic career, and his father Abedi is undoubtedly proud of him. His senior international debut came on 7th August 2007 at the age of 17.

Ayew was then in his first season as a pro at French giants, Marseille. Ayew immediately became a regular, with 5 caps earned by the end of 2007.

The attacker was then called up to the 08 AFCON, where he came off the bench a few times but failed to score.

In 2009, Ayew would captain the U20 team to victory at the African Youth Championship and the U20 World Cup. After experiencing men’s football adequately with 2 loan spells and international caps, Ayew was called up to the Black Stars’ 2010 AFCON squad with a bit more pedigree to his name.

At the tournament, Ayew played all 5 of Ghana’s games as The Black Stars earned silver in a gritty collective display.  Playing as a wide player in a 3-5-2 or 4-4-2, he netted once- the winning goal versus Burkina Faso in the group stage.

His improved display earned Ayew a place in the squad of the tournament.

Next was the 2010 World Cup four months later, where Ayew once again played a major part in Ghana’s successful campaign. Playing on the left wing, Ayew played 4 of Ghana’s 5 games as The Black Stars reached the QFs, their best-ever WC performance.

Ayew’s man of the match performance versus USA in the RO16 earned praise from many. 5 caps in 2011 as well as scoring frequently for Marseille in 11/12 ensured Ayew was called up for the 2012 AFCON. At the tournament, the forward played all 6 of his nation’s games, scoring twice as Ghana earned their first continental bronze medal.

Playing as a striker in a 4-4-2 alongside his brother Jordan, or Asamoah Gyan, Ayew scored once in the group stage and an extra-time winner in the QFs. Due to a dispute with the Ghanaian FA, Ayew retired from international football in February 2013.

He later overturned that decision 7 months later to help his team qualify for the 2014 World Cup. At the World Cup, Ayew played all 3 of The Black Stars’ games, scoring 2 goals. Unfortunately, Ghana exited in the group stages.

Next was the 2015 AFCON six months later. As he was fit, Ayew was called up by the Black Stars. Playing as a left winger in either a 4-4-2 or 4-2-3-1, Ayew played all 6 of his side’s games, scoring 3 goals as Ghana earned their 5th silver medal at the continental showcase.

A fantastic individual performance with highlights such as the winning goal versus South Africa in the group stage and a goal in the SFs earned Ayew the golden boot and a place in the team of the tournament.

Ayew’s performance at the 2015 AFCON as well as good club form earned him a move to EPL side Swansea City. He hit the ground running at the Welsh side, scoring 12 league goals in 34 games during the 2015/16 season.