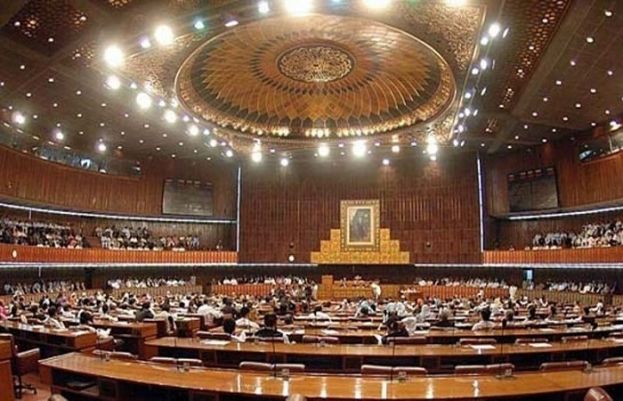 The crucial session for the no-confidence motion against Prime Minister Imran Khan — which started after much delay — was adjourned till Sunday 11:30am.

The NA Secretariat had issued the order of the day for today on Wednesday night, with a discussion on the no-trust move against the premier on the session’s agenda.

The session was held under the chairmanship of NA Deputy Speaker Qasim Suri, with more than 172 members from the Opposition benches in attendance.

As the session kicked off, during the question and answer session, all the Opposition members demanded the deputy speaker allow voting on the no-confidence motion.

At this, Suri said due to the “non-serious” attitude of the Opposition lawmakers, the session is being adjourned till Sunday.

PM Imran Khan has seemingly lost the majority in the lower house after PTI’s allies — MQM-P, BAP, JWP, independent MNA from Balochistan Aslam Bhootani — decided to side with the Opposition.

The prime minister, after the allies started leaving the government’s camp, has time and again repeated that he will not resign and “fight till the last ball”.

Earlier, PM Imran Khan called a National Security Committee (NSC) where the “threat letter”, which according to the government challenges Pakistan’s sovereignty, was discussed.

The premier is also scheduled to address the nation later tonight, as the political pressure on the premier mounts amid a no-trust motion against him floating in the National Assembly.

Leader of the Opposition in the National Assembly and PML-N President Shahbaz Sharif had tabled the no-confidence motion against PM Imran Khan on Monday — making him the third premier in Pakistan’s history to face the move.

During the session, Deputy NA Speaker Qasim Suri asked the members of Parliament, who are in favour of the motion, to stand up so that their numbers could be counted. As per the Constitution, 20% of the MNAs present in the Assembly must show support for voting.

Following the counting of the members who stood up in favour of the motion, the deputy speaker approved a discussion on the no-confidence motion, adding that it will take place on Thursday, March 31, at 4pm. However, voting on the resolution is expected to take place between April 1-4.

“The resolution shall not be voted upon before the expiry of three days, or later than seven days, from the day on which the resolution is moved in the Assembly,” the rules of the NA read.