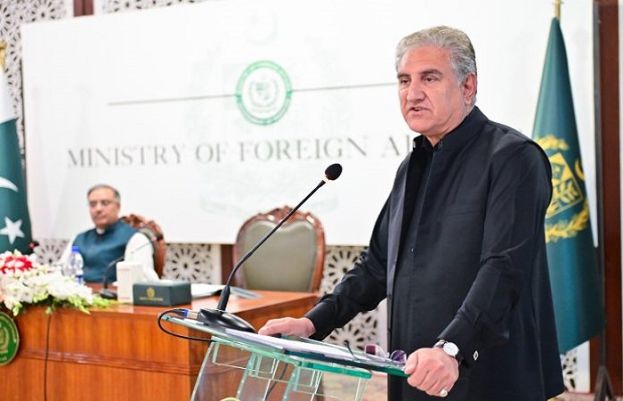 Foreign Minister Shah Mahmood Qureshi on Friday said the government of Pakistan Tehreek-e-Insaf was not in favour of brewing discords with other countries, however, stressed that it believed that no compromise should be made on national sovereignty and integrity.

Speaking to the officers of the Ministry of Foreign Affairs, he said the vision of foreign policy in Naya Pakistan was about keeping national interests supreme.
The foreign minister said the PTI government did not support bloc politics at the international level.

He emphasized that attaining economic stability was vital to pursuing a strong foreign policy.
FM Qureshi mentioned several initiatives taken by the government at the foreign policy front including economic diplomacy, Engage Africa policy, Central Asia Vision policy, and the establishment of the Strategic Communication Division.

The foreign minister said the efforts of Pakistani diplomats were being acknowledged abroad and mentioned that the huge remittances sent by the diaspora was a reflection of this fact.

He lauded Foreign Secretary Sohail Mahmood and the officials of MoFA for the successful holding of the 48th session of the Council of Foreign Ministers of the Organization of Islamic Cooperation (OIC) in Islamabad in March.

Toshakhana case: Take gifts back from those who took them home, says IHC judge