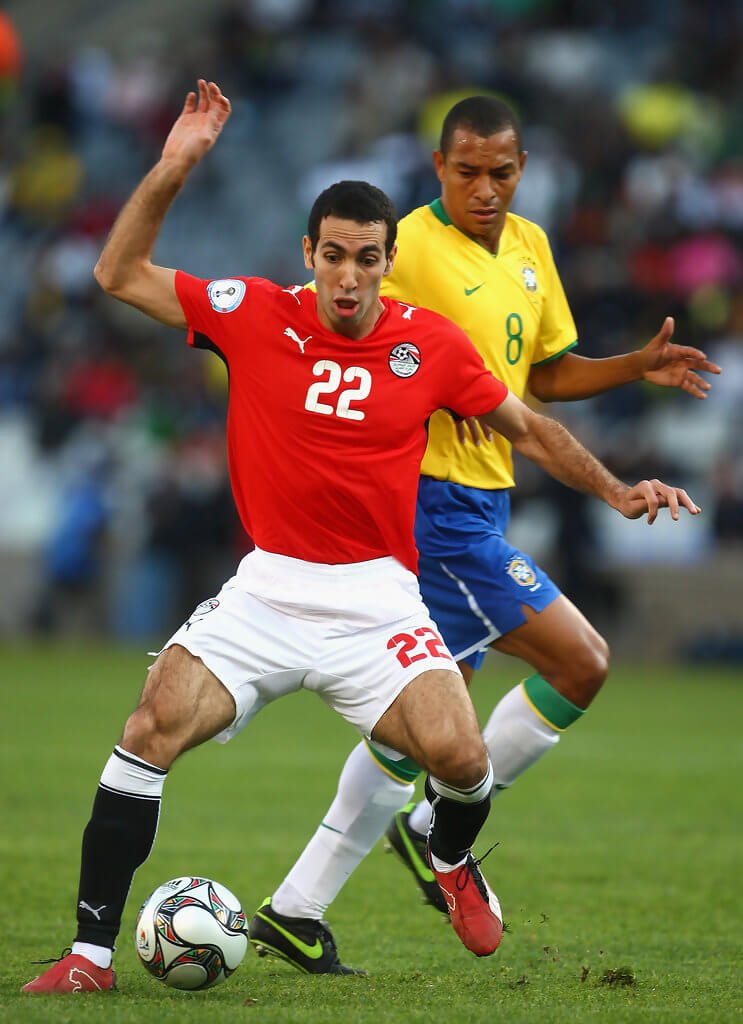 Hassan immediately became a regular in Turkey and this ensured his continued involvement with the Pharaohs. Between the 98 AFCON and the 1999 Confederations Cup, he earned 11 caps. As a result, Hassan was called to represent Egypt at the Confederations Cup.

At the CC, Hassan started all 3 of the Pharaohs’ games as Egypt were knocked out in the group stages. Playing in central midfield of either a 4-3-3 or 5-3-2, Hassan netted once in a decent individual display at the tournament. Next was the 2000 AFCON, which came only 5 months after the 99 CC. At the tournament, Hassan played 3 of Egypt’s 4 games as his side only reached the quarterfinals.

The versatile maestro continued to illustrate his importance to the team after these tournaments, amassing 29 caps between 2000 and 2002. He was also a regular for Turkish side Gençlerbirligi at the time. These factors necessitated his call-up to Egypt’s 2002 AFCON squad. At the tournament, Hassan started all 4 of the Pharaohs’ games as Egypt crashed out in the QFs once again. 12 more caps were earned by Hassan between 2002 and 2004, as well as a move to Turkish giants Besiktas where he immediately became a regular in the starting line-up, as well as on the scoresheet.

At the 2004 AFCON, Egypt continued their then-recently disappointing record in continental competition, exiting in the group stage this time as opposed to the QFs. Hassan started all of his side’s games in a mediocre display from both player and team. Hassan and the Pharaohs redeemed themselves in 2006, triumphing on home soil which made the victory a bit sweeter. Having already surpassed 100 caps at this point, as well as earning 14 caps since the 04 AFCON, Hassan was undoubtedly going to be a part of the 06 Egypt squad.

Mercurial yet dependable, Hassan was made captain of Egypt’s national team before the 2006 AFCON. He started all 6 of the Pharaohs’ games, netting 4 goals to propel his country to the apex of the continent once more. 3 of the 4 goals came in the knockout rounds, with 2 being opening goals of the QFs and SFs. Hassan’s stellar AFCON performance earned him a place in the team of the tournament, as well as being named player of the tournament.

His 2006 AFCON performance earned him a move to Belgian giants Anderlecht and Hassan hit the ground running at another club, playing as the #10 in a 4-3-1-2. He scored 20 league goals in 56 games during his 2 seasons in Belgium, while amassing 15 caps during that period as well. Consistently good form for club and country led to Hassan being called up for the 2008 AFCON. At the tournament, Hassan led the Pharaohs to their second consecutive AFCON triumph, aged 32.

He played in 5 of his nations 6 games at the tournament. A few months after the 2008 AFCON, Hassan moved back to Egypt to round out his career, transferring to Egyptian giants Al Ahly. After scoring on his debut versus rivals Zamalek, Hassan continued to be a regular starter for club and country, amassing 13 caps for the latter between 2008 and 2009. He was called up to Egypt’s 2009 CC squad as a result. Hassan played all 3 of the Pharaohs’ games as Egypt exited early, helping his side keep a clean sheet in a 1-0-win versus Italy.

At the 2010 AFCON, Hassan became the player to have won the most AFCONs (4) in history, guiding Egypt to a treble of continental trophies in the 21st century.

Playing in central midfield of either a 4-4-2 or 5-3-2, Hassan started all 6 of his nation’s games, netting three goals (2 in the knockout rounds) and leading his side to 4 clean sheets in an age-defying overall display at 34 years old. His virtuoso performance at the 2010 AFCON led to another player of the tournament triumph for Hassan, as well as a second inclusion in the team of the tournament.

Hassan’s last international game came in May 2012 at the age of 37. Having played in a record-breaking 7 consecutive AFCONs in his career, and triumphed in 4, Ahmed Hassan is one of the greatest players the continent has ever witnessed in action.

A naturally talented footballer, Hassan’s versatility saw him play in various roles; from right-back to the wings to central midfield. A set-piece specialist also capable of piledrivers from distance with his favoured right foot, Hassan’s longevity in conjunction with his quality will ensure he’s remembered as one of the greatest ever.

The Pharaohs’ top scorer of all-time, Hossam Hassan is a legend in Egypt due to prolifically scoring for Egypt as well as the nation’s two biggest sides, Al Ahly and Zamalek. His senior international debut came on September 10th 1985 at the age of 19- Hassan was in his second season as a pro at Egyptian giants Al Ahly at the time.

Initially a sporadic member of the Pharaohs, amassing only 4 caps by the end of 1986, Hassan began to feature more regularly in 1987, with 6 caps in this year alone.

His first international tournament was the 1986 AFCON, and it ended successfully as Egypt won their third-ever continental trophy. Hassan was more of a squad member then, appearing only once at the tournament. By AFCON 88 though, the attacker had become a more prominent part of the team. He started all 3 of his nation’s games as Egypt defended the trophy in disappointing fashion, exiting in the group stage. Despite the poor collective display, Hassan was now an established member of the national setup.

Between the 88 AFCON and the 1990 World Cup, Hassan earned a ludicrous 35 caps. He also continued to score prolifically for Al Ahly, ensuring his place in the 1990 WC squad. At the tournament, Hassan started all 3 of the Pharaohs’ games as the Egyptians were eliminated in the group stage. Playing as a striker in a 3-5-2 and 4-4-2, Hassan performed decently but didn’t manage to score. He continued to feature for Egypt afterwards, earning 14 caps between 1990 and 1992.

Having moved to Europe in 1990, Hassan featured occasionally for Greek side PAOK and Swiss Side Neuchatel Xamax in the next 2 years. Despite his poor club form, he was still trusted to be part of Egypt’s squad for the 1992 AFCON. At the tournament, Hassan played all of his side’s games as Egypt disappointed once again.

Kanye West spends $275,000 on a whole Birkin bag for his girlfriend, Chaney Jones