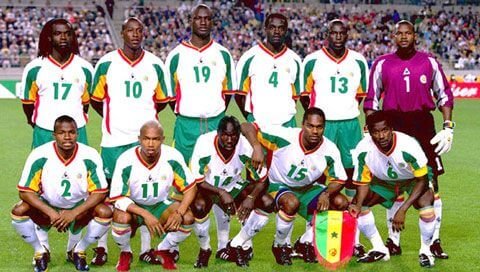 At the tournament, the forward played 6 of his nation’s 7 games, netting 3 goals to propel The Lions so close to their first-ever trophy. His goals were a brace versus Kenya in the group stages and the winning goal versus Uganda in the QFs.

One of the few African players to score 100+ EPL goals, Mane was a dynamic winger transformed into a clinical inside-forward as his career has progressed.

Blessed with speed, quick feet, and strength- Mane has developed his football intelligence over time, which has seen him improve his anticipation, attacking positioning, and heading ability. Mane is one of the most complete attacking players in the world.

An underrated player during his prime, Papa Bouba Diop was the box-to-box dynamo who drove the national team forward on the biggest stages. His senior international debut came on the 16th June 2001 at 23-years old. Diop was then in his fifth season as a pro, and first at Swiss side Neuchatel Xamax.

The midfielder impressed immediately, and earned 4 more caps that year. As a result, Diop was called up to Senegal’s 2002 African Cup of Nations squad early in the following year.

At the tournament, he played 5 of his nation’s 6 games as Senegal earned a silver medal, their first-ever at the continental tournament. The team performed well and so did Diop, who scored the opening goal in the semifinals win versus Nigeria. Despite performing so well, the midfielder was not in the team of the tournament.

Regardless, a few months later, Diop was playing for Senegal at the country’s first ever World Cup appearance.

At the WC, Diop played all 5 of Senegal’s games as The Lions made it to the QFs in an exceptional display of cohesion from the team. Playing either as a central midfielder in a 4-1-4-1 or a right midfielder in a 4-4-2, Diop had one of the greatest-ever WC performances from an African, netting 3 goals at the tournament.

One was the winning goal versus France and the others a brace versus Uruguay, both in the group stages.

After performing well at the AFCON and WC in 02, Diop was now considered indispensable in the Senegalese team, earning another 7 caps in 2003. As he was fit and playing regularly for French side RC Lens at the time, the dynamo was called up to Senegal’s 2004 AFCON squad.

At the ‘04 AFCON, Diop played all of his nation’s games as Senegal exited in the QF stage, a mediocre effort from the team. Diop did well individually, scoring once and helping his side keep 2 clean sheets.

Between the ‘04 AFCON and the next one in 06, the midfielder earned another 14 caps. Then playing regularly in the Premier League with Fulham, Diop was certain to feature for Senegal at the 2006 AFCON. At the tournament, Diop played 5 of Senegal’s 6 games as The Lions came 4th, an improvement on their last showing on the continent.

He helped his nation keep 1 clean sheet, while also scoring Senegal’s first goal in the QFs comeback win versus Guinea.

Diop’s last major international tournament was the 2008 AFCON. He played all 3 of his nation’s games as The Lions were eliminated in the group stages, a shocking outcome on the continent. Diop retired from international football after the tournament, aged 30-years old.

Nicknamed ‘The Wardrobe’ in England due to his physical stature, Diop was similar to Michael Essien and Patrick Viera with regards to his tenacity off-the-ball and progressive carries on the ball.

Technically brilliant with a goal in him, Diop’s stamina was also immense, outrunning everyone on the pitch on a weekly basis. Diop sadly passed away in November 2020, aged 42.

The superstar playmaker of the prodigious Lions team of the early 2000s, El-Hadji Diouf’s off-the-field antics later on in his career have put a black mark on how good he actually was as a player. Diouf’s senior international debut came on the 23rd April 2000 at 19-years old.

The attacker was then in his second season as a pro, and first at French side Rennes. Initially a sporadic member of the national setup in his first year, Diouf began to gain more recognition as he hit good form for Rennes in the 2000/01 Ligue 1 season.

The playmaker then started the 01/02 season in good form as well, which prompted a call-up to the 2002 African Cup of Nations in January 2002.

At the tournament, Diouf served as the creative spark of team, playing in all 6 of his nation’s games and netting once as Senegal earned their first-ever silver medal at an AFCON.