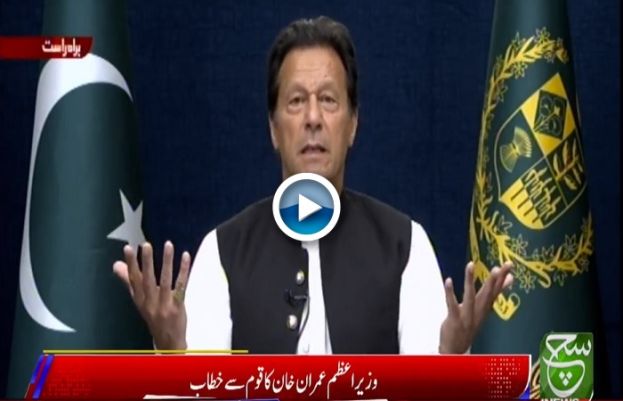 Prime Minister Imran Khan on Thursday addressed the nation days ahead of voting on a no-trust resolution against him in the National Assembly that will decide his fate.

“Today, I have to talk something important about the country’s future,” the prime minister said in his opening remarks. “I decided to do this address live because Pakistan is at a defining moment and we have two paths ahead of us.”

“But before that, I want to tell you that why a person like me entered politics. I am a fortunate person whom Allah had blessed with everything, including fame and wealth. I am from the first generation that was born in a free country.

“Pakistan is five years older than me. My parents were born during times of slavery. They made me realise that I was lucky to have been born in a free country because in slavery you cannot rise above a certain level. Khuddari is a sign of a free nation.”

The prime minister explained why he had entered politics in the 1990s following a successful cricket career. “I entered politics because I came to the conclusion that Pakistan can never be the country that Allama Iqbal dreamt of and Quaid-e-Azam struggled for even in poor health,” he said. “The main purpose pf Pakistan was to become an Islamic welfare state, which traces back to the state of Madina.

“When I started politics, I included three things in my party’s manifesto. Justice, which means law is the same for the powerful and the weak. Humanity because there is kindness in an Islamic state, and third, Khuddari because a Muslim nation cannot be a slave.”

The prime minister continued: “Had Allah not blessed me with faith, I would [not have] entered politics. I was mocked for 14 years and people repeatedly asked me why did I enter politics. I came into politics because of an ideology.

“Since I joined politics, I have always said that neither will I bow down before anyone and nor will I let my nation bow down. It means I will not let my nation be a slave to anyone. I have never backed down from this stance.”

“I decided the day I became the prime minister that our foreign policy will be independent, which means it will be for Pakistanis. It doesn’t mean that we wanted enmity. When I got the government I said that we will not have any foreign policy that is not in our favour.”

The prime minister then discussed the ‘threat letter’ that purportedly shows “evidence” of a foreign conspiracy to oust his government. In what appeared a slip of tongue, he named the United States as the country behind the threat.

“I am here today because on March 8 or 7, the United States … not the US … we got a message. For a free country, a message like this is [not only] against its prime minister but is also against the country [itself].”

“They knew beforehand that a no-trust move was coming. The no-trust motion was not even submitted [at the time]. It means that they (the opposition) was connected with these people abroad, They say they are angry with Pakistan … they make this excuse. They say they will forgive Pakistan if Imran Khan loses in no-trust move, but if the move fails, Pakistan will have to go through a difficult time.”

“In an official document it was said that ‘if Imran Khan remains the prime minister, our ties will suffer and you will face difficulties.'”

“I am telling my nation today that this is our status. We are a nation of 220 million and another country — and they are not giving any reason — [is issuing threats]. They said that Imran Khan decide to go to Russia on his own even though the Foreign Office and the military leadership was consulted.

“Our ambassador told them that the decision [to visit Russia was made after consultations] but they are denying it and saying that ‘it was only because of Imran Khan and that our ties cannot be good if he stays.’ What they are actually saying is that they have no issue with the people who will replace Imran Khan.

“The most disturbing thing is that they (foreign forces) have links with the people through whom the conspiracy happened, They are stooges, and stooges means loyal slaves.”

The prime minister was originally expected to address the nation yesterday. However, the address was postponed without providing any reason.

The development comes as the prime minister is facing a no-confidence motion in the National Assembly. Yesterday, the MQM-P — the government’s main ally in the Centre — announced that it would support the joint opposition in the no-trust resolution.

The MQM-P has seven seats in the NA and after its decision to part ways with the government, the opposition has gathered the support of 177 MNAs, five more than the 172 required to gain a majority.

In the face of the opposition’s onslaught, PM Imran has also made allegations of a “foreign conspiracy” being responsible for efforts to oust him.

At a public meeting held on Sunday, the premier had pulled out a piece of paper from his pocket and waved it at the crowd, claiming it was evidence of an “international conspiracy” being hatched to topple his government.

On Wednesday, this letter was shared with members of the federal cabinet in a hurriedly called meeting, which was not attended by the MQM-P and Balochistan Awami Party (BAP) despite being invited. The letter was shown to the cabinet members on a TV screen.

PM Imran also called a selected group of TV anchors and informed them that “the language of the letter was threatening and arrogant” and that Pakistan would face dire consequences if the no-confidence motion failed.

However, the premier did not show the letter to the media.