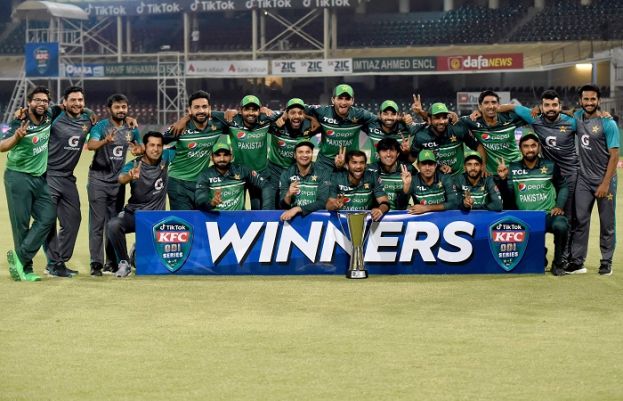 Eyeing to clinch the series, Pakistan opted to bowl first after winning the toss in the final ODI against Australia Saturday played at Gaddafi Stadium.

Pakistan have included Asif Ali in place of Saud Shakeel while Australia made one change in the final XI bringing in Jason Behrendorff in place of Mithcell Swepson.

Speaking after the toss, Pakistan skipper Babar Azam said he was confident of winning the series after beating the visitors in the second ODI.

Pakistan after an 88-run defeat from Australia in the opening match bounced back strongly and levelled the series with a record run-chase.

The second match was a high-scoring affair and the hosts managed to hold their nerves to finish on a winning note.

Pakistan skipper Babar Azam won the toss and opted to bowl first. But the home team saw Travis Head, who hit a century in the first match, continue in the same style, as he scored 89 at the top of the order.

Ben McDermott, who hit a half-century in the first match, improved his game further and scored his maiden ODI century to help his side post a mammoth 348 on the board.

Shaheen Afridi, who returned for the second game of the series, picked up four wickets. It was an uphill task for Pakistan but opener Imam-ul-Haq and Babar hammered brilliant centuries and then Khushdil Shah’s cameo helped Pakistan reach the target with an over to spare.

Australia must be in a fix as to what had happened in the second match that slipped away from their hands.

Pakistan have seen their batters perform and all they now need is their bowlers to create an impact to dictate terms.

PM rules out option of allies in new set up