The southern port city of Pakistan Karachi has a multi-cultural history — its population is made up of people from different religious sects who speak different languages. There, people from all backgrounds give vibrance to the megacity, which has been a melting pot in the region since before Pakistan’s formation.

One such group that has contributed to Karachi’s flare through the decades is the Portuguese Goan community, a group that started migrating to Karachi in the 1820s seeking jobs as traders. At the time, the shipping business was booming in Karachi and Goans played an important role in developing the industry. The descendants of these migrants from India say their community is shrinking as many young people seek opportunities outside of Pakistan.

The Portuguese, led by Afonso de Albuquerque, invaded Goa in 1510, wrestling the city from the Bijapur Sultanate and establishing the West coast of India as its hub for the eastern spice trade. When the Portuguese took over Goa, many Goans who did not want to live under their control, set out for other parts of India and what is now Pakistan. Many of the people who made their way to Karachi came by sea on small sailboats.

When the first wave of migrants arrived in the mid-1800s, the city was an obscure fishing town of 35,000. Over two centuries, it has grown into a megapolis, where Goan contributions are evident to anyone who knows where to look for them. The majority of the estimated 100,000 who came to Pakistan settled in Saddar, Keamari, DeSilva Town, Catholic Colony, and P.E.C.H.S. in Karachi. The Goan diaspora in Pakistan is primarily concentrated in Karachi, living peacefully around the major churches in the city.

Goa was the capital of the Portuguese empire east of the Cape of Good Hope until India reclaimed the area in 1961. When this colonial period ended, Konkani, the mother tongue of Goans, became the official language again. Still, some Goans decided to stay in the cities where they’d migrated, including Karachi.

Before partition, Goan culture in Karachi was strong, Luciana Fernandes, the owner of a Goan food shop in Karachi, told The Express Tribute. But over time, this population melded into the chaos of Karachi, and some Goan traditions got lost. Fernandes’ father Nicholas Briaganza came to Karachi before the formation of Pakistan by ship and opened the first Goan food shop in Karachi – housed in a blue building near Zahid Nihari in Saddar.

Fernandes’ mother, Rita Briaganza, moved to Karachi when she was a child, later working as a caretaker in the houses of people from the Parsi community. Fernandes was born and educated in Karachi where she worked in a pharmaceutical company. 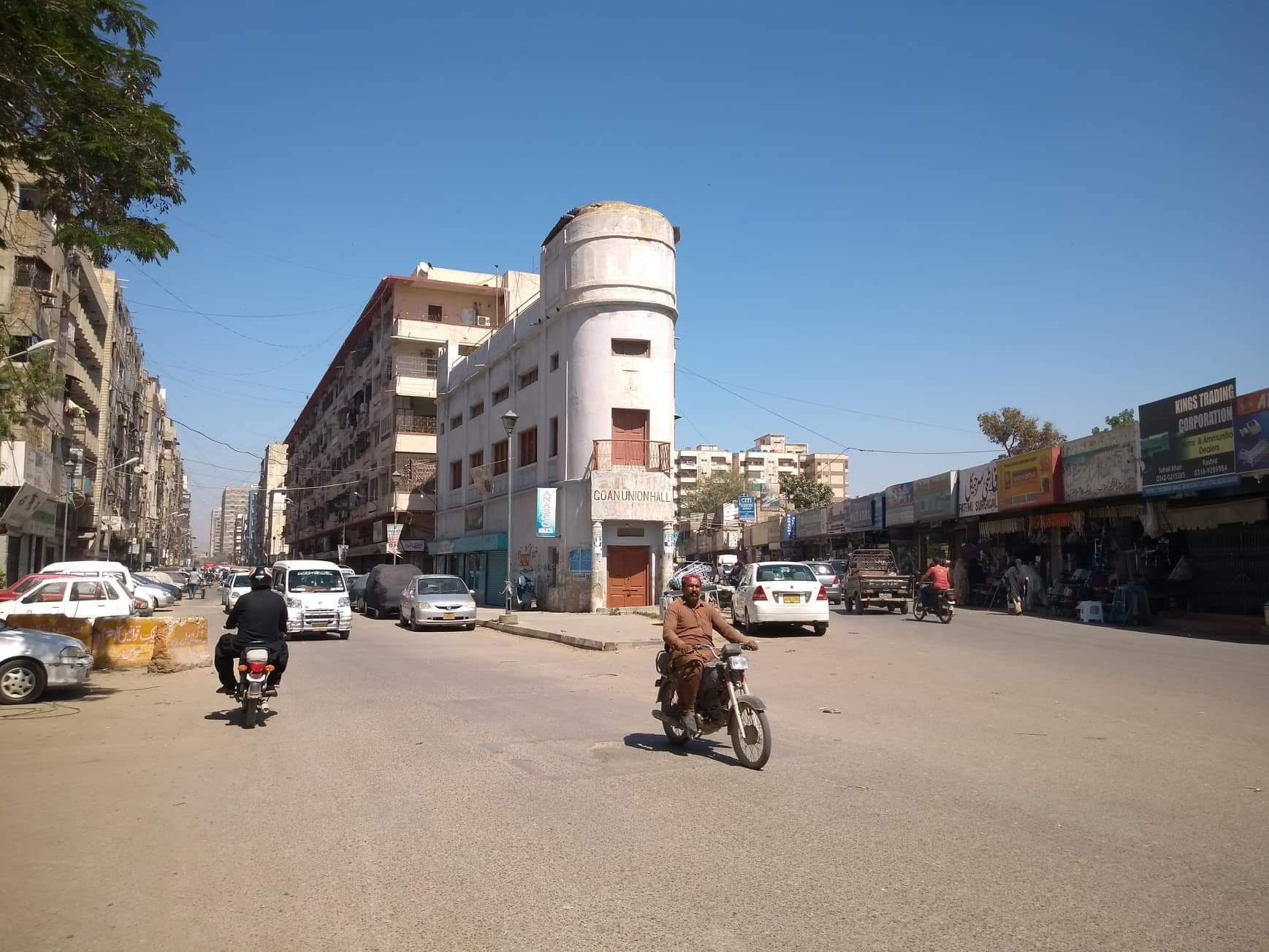 In 2019, after brainstorming with her daughter and husband, she decided to open a restaurant to serve traditional Goan dishes to people in Karachi. In the beginning, the restaurant only had customers from the Goan community, but later attracted people from other groups too. Local Christian and Muslim community members now come to enjoy Goan foods, including kingfish masala, vindaloo, prawn curry, and various picked dishes.

The Goan community in Karachi is shrinking, Jenny D’Souza, a woman from Saddar told The Express Tribune. She said the priority of the next generation is to move to other countries in search of better opportunities. “I have spent my entire life here in Karachi with glorious golden moments and very nice people,” she said. “But the youngsters look disappointed here.”

D’Souza’s father was a mechanical engineer who came to Karachi in 1933. D’Souza grew up in Karachi and did his matriculation from a local missionary school in Saddar, where thousands of people from the Goan community were living. She describes Goan people as hard-working and well-educated people. Many Goans worked in banks, the shipping industry, and government offices during the British colonial era. As a result, Goan Christians were highly qualified and able to take up key posts in Karachi.

After the partition, many people from the Goan community represented Pakistan in sporting events at the international level, including Peter Paul Fernandes who represented British India in Field Hockey in the 1936 Berlin Olympics.

Manuel Misquita was Mayor of Karachi in 1946 and many Goans were councilors in the Karachi Metropolitan Corporation (KMC). Roads in Karachi — including Britto Road, Pedro D’Souza Road, D’Cruz Road, D’Abreo Street, Nazareth Street, and DeSilva Street — were named after pioneering Goans.

According to Menin Rodrigues, the author of ‘Goans of Pakistan – Footprints on the Sands of Time,’ Karachi is home to some 6,000 Goans. In the 1950s and 60s, there were around 15,000. Menin, a businessman who lived most of his life in Karachi before moving to Canada, started documenting the history of Goans in Pakistan to celebrate their significant contributions to the city’s development before and after the partition.

Goan contributions in spheres of religion, sports, and businesses helped the city grow. Goan teachers were the backbone of most missionary schools in Karachi, Rodrigues said, and the community produced some shining stars in education. Over time, Goans have also contributed to the city’s judiciary system and civil service – taking up positions as politicians, police personnel, and intelligence officers. They have also taken up posts in Pakistan’s armed forces.

As a result, Goan civil society after partition was strong, Dennis Francis, manager of the Karachi Goan Association, told The Express Tribue. The KGA used to have over 900 members, but most have relocated to Europe, Australia, the United States, the United Kingdom, and Canada. Francis said now only 5-10 people visit the Association every day.

Goans played a significant role in the development of Christianity in Karachi, since most of the population that came to Karachi were Roman Catholics. The community took strides to practice their religions, putting resources into building the St. Patrick’s chapel, which later became a church. St. Patrick’s became a gathering point for the Catholic community, where Goans also gathered for festivals and other religious events.

The community also helped establish St. Patrick’s High School — one of the oldest and most reputable secondary schools in Karachi. Besides their concrete contributions, the Goan community contributed their love for food and dancing to Karachi, things that forge a strong cultural affinity between Goans of Goa and Karachi.

Soured relations between the countries have affected some areas of Goan life, though. It made the price of some products more expensive, which made it harder for Goans to cook their traditional foods, which at one point were a well-known part of Karachi’s culinary landscape. Changes inside Pakistan also became a catalyst for Goans to leave Karachi.

Now there are only around 400 Portuguese Goan Christians in Karachi Martin D’Souza, 70, told The Express Tribune. Karachi was different before the partition and the Goan community enjoyed the music and spirit of the cinemas, clubs, and hotels in Saddar. Between th 1950s and 1970s, Karachi had hundreds of cinemas and night life that could rival other tourist hubs in Asia an the Middle East.

During that time, people from around the world and cheap tourist hotels became prevalent, especially in Saddar, where these visitors could also interact with the Goan community. But D’Souza said things changed in the decades that followed as Pakistan took a conservative turn, which further spurred an outflux of Goans to other countries. Many people from the Goan community lived in Soldier Bazar in Bungalows, but they sold their houses, and now the people from the Shia Community live there, Martin said.

Sadly, the number of Goans who remain in Karachi is a tiny fraction of the number there used to be, Assis Fernandes a Portuguese Goan Christian told The Express Tribune. Fernandes’ parents migrated to Karachi from Goa in 1937, while some of his relatives remained in Goa where they worked in the cargo business.

Family members on either side of the border have visited each other over the years. He said the environment for Goans in Pakistan is good and his family is living happily in the country, trying to keep some part of their culture there alive.

And although the number of Goans in Pakistan has decreased, their influence on the city remains in its food, religion, music and commerce – a testament to the vivacity of this group that made Karachi their home.

(The writer is a freelance journalist based in Karachi. He can be reached on Twitter @Zafar_Khan5)