LONDON: PML-N Supremo Nawaz Sharif Friday said he never thought Pakistan would get into the situation where it is today, vowing to “fight till the end”.

Speaking to journalists after the National Security Committee (NSC) concluded that no foreign conspiracy was hatched against former prime minister Imran Khan, Nawaz said that the truth always comes out and “truth is coming out now; however, today, only 5-10% of truth has been revealed.”

Blaming Imran Khan for his dismal performance during his three-and-a-half-year tenure, Nawaz said that former finance minister Ishaq Dar built the economy but “this man [Imran Khan] destroyed it.”

The PML-N supremo further accused [Imran Khan] of “committing atrocities” in the name of Riayasat-e-Madina.

“He has damaged the country to an extent that he should be seen as an example. He [Imran Khan] does not believe in anything, neither the Constitution nor the law or the Parliament,” he said, adding that the PTI chairman should have accepted the no-confidence motion against him.

“Why did the Supreme Court have to give a decision.”

Regarding President Arif Alvi not administering the oath to the Prime Minister Shehbaz Sharif and other federal ministers, Nawaz questioned: “If you are the president of the country, how can you not perform your official duties?”

“I will continue to fight till the final victory of democracy,” he reiterated.

Read more: You took U-turns on everything, why will anyone conspire against you? Nawaz Sharif hits out at Imran Khan 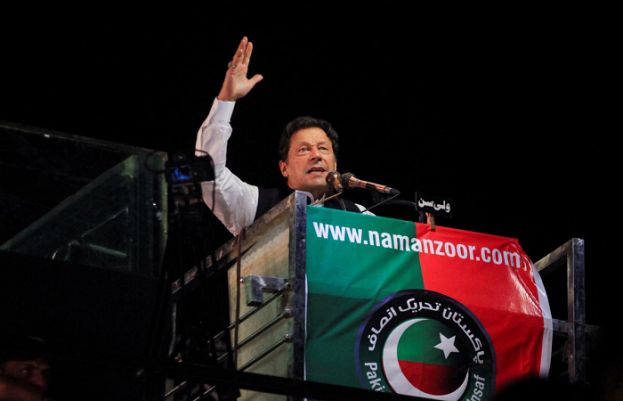